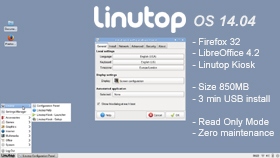 Linutop announced today the latest version of its Operating System 14.04 for PC and Intel NUC PC:

- Linutop OS is an optimized version of Ubuntu XFCE LTS 14.04 including up to date Linux drivers and major softwares VLC 2.1 , Firefox 32, Libre Office 4.2 in the smallest package (< 1GB)

- Linutop Security Lock: The system can be locked into read only mode, preventing alterations by viruses or other mishaps. Its ability to recover its initial state at each startup is key to minimizes maintenance costs.

-Internet Kiosk: Allows users to configure their homepages in full screen with toolbar or not, setup black lists and white lists to control navigation.

-Display Kiosk: Allows users to configure a playlist of Images, Web Pages, URLs, Video, folders, PDF  and sounds files with an intuitive interface, in order to  display the media in full screen. 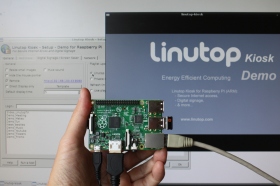 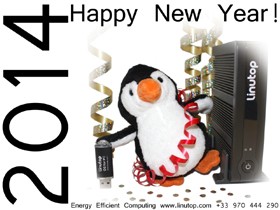 Save the snow for the penguin: use energy efficient computing solutions!

recycle an old PC with linutop OS (and save money)!

Linutop Team is wishing you a Happy Green Year 2014! 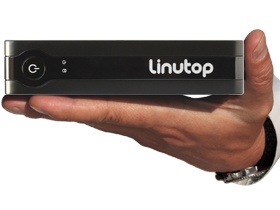 The new Linutop 5 is powered by Linutop OS 5 , lightweight and optimized Ubuntu distribution 12.04 LTS including Internet and display kiosks for professional uses available for download or on a USB key .

Boot time below 46 s.
The brochure and the quick userguide (pdf) .
The new Linutop 5 is available on Linutop Shop

Turn Your Linux Machine into an Application Server in 10 Minutes

Machines like Linutop can make a rather neat mini server which you can use to host virtually any application base on the LAMP stack (Linux/Apache/MySQL/PHP). The problem is that turning Linutop (or any machine for that matter) into an application server involves setting up the required servers (e.g., Apache and MySQL), manually modifying configuration files, and tweaking application settings. Fortunately, the BitNami service provides a more straightforward way to install a number of LAMP-based applications on your machine. BitNami offers so-called stacks — a preconfigured bundle containing a specific application, all the required components, and a graphical installer. A list of the available BitNami stacks includes MediaWiki, WordPress, phpBB, Joomla, Drupal, DokuWiki, and other popular Web-based applications. Installing a BitNami stack is as easy as it gets. Fetch the BitNami stack you want and run the downloaded .bin installer in the terminal. For example, if you downloaded the Tracks pack, you can start its installer using the following command:

The installer then guides you through the setup process. At the end, the installer generates an uninstall script which you can use to easily remove the stack when necessary. 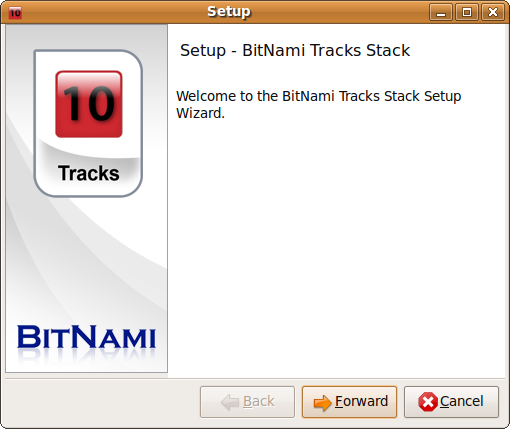 Once installed, you can start, stop, and restart the stack using the ctlscript.sh in the tracks-x.x-x directory, for example:

You can access the running application by pointing your browser to http://localhost:8080/tracks/. Besides being easy to install and deploy, BitNami offers other advantages. Since each BitNami stack installs as a self-contained application, you can have multiple instances of the same stack installed on a single machine. The installed stack doesn’t affect other services running on the machine, so you can still run separate Apache or MySQL servers without interfering with the BitNami stack, provided they don’t attempt to run on the same ports.

I’ve heard that Linux is for geeks. Is that true?

Not at all. It might have been the case a decade ago, but today you’ll find many beginner-friendly Linux distributions. They use graphical desktop environments like KDE, Gnome, or Xfce that don’t require any particular skills beyond point-and-click. In fact, there is even a book with that title.

OK, let’s start from the very beginning. Linux is an operating system that manages your hardware and allows you to perform basic operations using the bundled tools. The base system is too technical for most users, so on top of it often sits a so-called graphical desktop environment that shields you from the complexity of the underlying system. The most popular graphical desktop environments include KDE, Gnome, and Xfce. Installing the Linux system on your machine, then adding a desktop environment, and finally installing the applications you need sounds like a laborious and time consuming process. Fortunately, you can get everything you need in one neat package called a Linux distribution. A typical Linux distribution (or distro) comes with one or several graphical desktop environments, a user friendly-installer, and a collection of utilities that can help you to configure your system. Often a Linux distro uses a specific graphical desktop environment as its default. For example, Ubuntu prefers Gnome, while Mandriva favors KDE. Virtually every Linux distribution comes with configuration tools that can help you to set up your computer. Using them, you can tweak your desktop’s appearance, connect to a printer, configure a network connection, etc. Moreover, any distro worth its salt comes with an assortment of applications, so you can use your computer for pretty much any task — from browsing the Web to editing your photos — right out of the box.